We caught up with performance provocateur Desiree Burch to talk about her eye-opening show about race Tar Baby, which is at VAULT festival until Sunday 14 February.

Tell us about your career and what led you to create Tar Baby?

I am a classically trained theatre actress whose career quickly transitioned into performance art and stand-up while living in New York. My solo works, like ‘Tar Baby’, incorporate both of these skills, presenting personal, honest storytelling about often taboo subjects with brash and thoughtful humour.

‘Tar Baby’ began as a supposed piece about personal and social narratives. My collaborator Dan Kitrosser and I wanted to talk about folk tale, history and storytelling. However, as I began to write more of my personal stories to incorporate, it became apparent that so many of them had been formed by being black in America and the racist narratives I had to contend with in order to become. It’s ultimately the idea of narrative, and it’s function in the ‘sell’ of these deeply seated beliefs, that the show focuses on. I think awareness of these narratives and how they function is the most powerful aid in helping us awaken from our racist delusions. 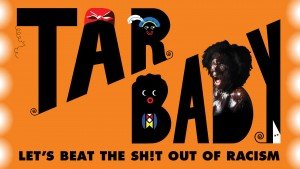 What do you think Tar Baby has to say about racism in 2016?

More than being prescriptive about how to change racism, ‘Tar Baby’ initiates conversations about it from a place of vulnerability and authenticity. I think that the most important thing that anyone can say or do about racism in 2016 is to not remove themselves from the conversation or implication. It is a real thing, and we’re all the products of racist culture. Saying “I’m not racist” is like saying “I was born on the planet Krypton.” Um…. nope! Taking ownership of the reality is essential in dealing with it, and being awake to how our history persists is crucial to that.

Who inspires you to make your work?

I often feel driven or called rather than inspired when it comes to making my work. Discovering a challenge that I realize is both personal and socially pervasive drives a lot of my work. I see areas in which I need to evolve and I share them out, because I know I’m not alone.

What are favourite things to do when you’re performing in London?

But also, I love being able to have time to sit upstairs on the bus and see the city. It’s full of so much great public art and there are so many gorgeous bridges to see at night. I mostly love spending times with the friends I have here and being introduced to new hidden gems I didn’t know existed. I love the parks and all the nature that are in this massive city and I love being able to take a drive out of it to see other parts of the country.

See the show this week at VAULT festival