To Do List Previews… Derren Brown INFAMOUS at the Palace Theatre 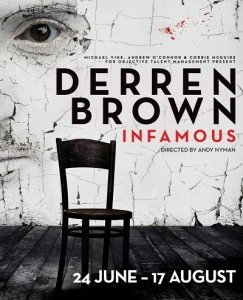 As we’re regularly passing through Cambridge Circus, we were sad to see the wet-look umbrellas coming down from the front of the Palace Theatre – but we’re super excited to see that Derren Brown will be taking up residency for 8 weeks.

The award-winning master of psychological illusion returns to the West End stage with his new one-man show Infamous, following a sell-out national tour.

They Say: The dark manipulator brings his unique brand of magic and mind control to the Palace Theatre, Shaftesbury Avenue, for a limited season from June 24 to August 17. Infamous is the sixth in Derren’s historic series of live shows, which have seen by over one million people. “The show is a secret so I’m not giving away what’s in it, but it’s a psychological roller-coaster based around audience participation. And it’s got a real heart to it. The response on tour has been incredible, it’s all such a treat.” (Derren Brown)