The Curious Incident of Marcus at the Theatre on Wednesday

To Do List sent documentary and portrait photographer (and occasional To Do List culture vulture), Marcus Hessenberg, to see the Apollo Theatre transfer of the National Theatre’s acclaimed production of The Curious Incident of the Dog in the Night-Time. And he filed a review. 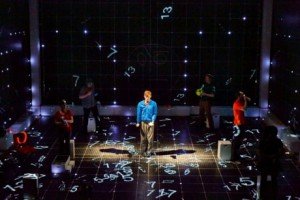 So we feel it’s important to say that the views below are Marcus’ own – entertaining, insightful, witty and reliably offbeat! The To Do List editorial team saw TCIOTDITN-T at the beginning of its run at the National, and loved it.

But here’s what Marcus thought:

Having not read the book, I sat down in the Apollo Theatre to watch The Curious Incident of the Dog in the Night-Time. I say I have not read the book, but in all honesty I have actually attempted the first few pages twice. For some reason I never felt compelled to read further, and so I thought perhaps this stage adaptation could finally, successfully expose me to Mark Haddon’s much-loved modern classic.

And so, as the room filled with plastic surgery patients from Sloane Square, and TV presenters from my childhood and their own children, the performance commenced. We were first hit with thunder and lightning and the image of Christopher, our protagonist, standing over his neighbour’s dead dog; a large garden fork standing upright from the body. “What have you done to my dog?!” The neighbour screams, and so the detective story commences. Or does it? We know who killed the dog before the first half is over, and in reality this story is about a boy with an unspecified form of learning difficulties and the behaviour of his mother and father.

By a third of the way through The Curious Incident of the Dog in the Night-Time, I was starting to grow tired of the stage design and choreography. Though at first the mix of a totally graphed and  blackboarded room with flashing lights was striking, the movements of all the cast during periods felt school play-esque, and it was possible to imagine the director’s voice shouting, “more like a ballet dancer when you mime to put back your toy in the box!”.

Where is Social Services in all this?!

There were too many moments where I felt unconvinced by the behaviour of those characters around Christopher. It seemed as though no policemen had ever come across people with learning difficulties in their career – in fact, it seemed no one had. When Christopher managed to make his way up to London he even somehow manages to jump on to the Underground train tracks and not be electrocuted. Not only was he not electrocuted but having been nearly hit by a train and saved by a very impatient onlooker, no one gets involved. The train driver does not stop or report the incident, no one sees it on CCTV, no witnesses seem to report it. And where is Social Services in all this?! 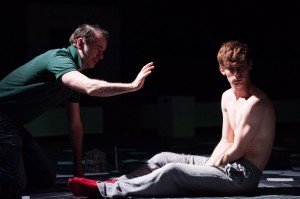 I know I am being far too literal, but all this meant that as far as I was concerned, the continuation of the story was impossible. And when loud technical dance music kept popping out of nowhere, I felt this production was confused. Was it a children’s play? No, there was too much swearing for that and the teenage girls behind me had to keep asking each other what was happening (and told each other in stretched-out detail). Was it a piece of avant garde theatre and dance? No it was not good enough for that.

But as the play finished, the cast bowed to a standing ovation. And as I took the bus home and started talking to a stranger about their friend’s experience of dating a hermaphrodite, I mentioned that I had just seen The Curious Incident of the Dog in the Night-Time. “Oh that is a coincidence! That was one of my friend’s dates with him/her! She said it was REALLY good!”. And so I may be very wrong.

So the question is, Is Marcus Wrong?

We think he his, but there’s only one way to find out – buy yourself some tickets, and make your own mind up! The Curious Incident of the Dog in the Night-Time stars Luke Treadaway, Niamh Cusack, Matthew Barker, Sophie Duval, Rhiannon Harper-Rafferty, Nick Sidi and Howard Ward, and runs until 31st August 2013.