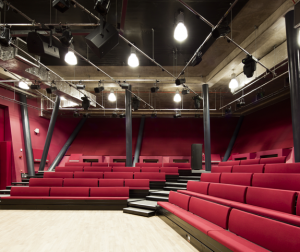 dead easy to get to on the tube or bus, and tickets for their rather splendid opening programme are from £8. We cannot recommend it enough, as it shows that council run arts facilities can be amazing and are worth investing in. Good on you Southwark Council!

Our pick of the programme:

1976. A desperate girl with bleached out dreams begs and steals to meet her heroine, Debbie Harry- one way or another. Featuring a dazzling soundtrack plucked straight from New York club CBGBs.
New York City 1976, the most exciting era in musical history. The Ramones, Televison and a new band- Blondie. Written and directed by Adrian Berry, Boo Dwyer’s Dye Young/Stay Pretty is a sex, drugs and rock ‘n’ roll-fuelled adventure. “Packs an emotional punch, definitely one to see.” -The List 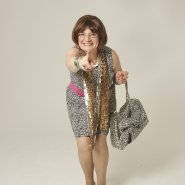 Join Mrs. Barbara Nice for a friendly, inclusive atmosphere with home truths, great timing and unique comic insights into the human condition.
Mrs. Barbara Nice, Stockport mother of five, is worried that we are living in a world of ever diminishing friendliness where we keep ourselves to ourselves, heads down afraid to catch anyone’s eye. She wants us all to stand proud, be open and look the world right in the eye – or we won’t even feel the benefit! “A hybrid between Victoria Wood and Mrs. Merton” -The Times 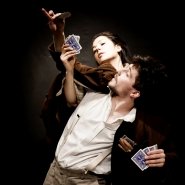 An enthralling visual tale combining movement and live music. The Gambler is the story of Edgar, an old man trapped in his past. As he confronts his addiction, he wonders if his decisions were truly his own.
Each spin of the wheel recalls the promise of a life he could have had. He gambles to remember, he gambles to forget. Dreams and reality are the stakes in this beautifully staged, engaging and evocative new production by Theatre Re drawing on the experiences of real gambling addicts in London.

Barb performs songs from her latest album, The Man In The Long Black Coat, featuring 13 Bob Dylan songs she has recorded over the last 8 years.
Barb Jungr may be the definitive performer of one of the greatest musical icons of the twentieth century, Bob Dylan. Billy Bragg has described her as “possibly our best interpreter of Dylan’s songs.” He is not alone in this view, as Jungr has been wowing audiences and critics worldwide with her astonishingly powerful reinterpretations of this great songwriter’s work. “Communicating real, heart-felt emotion is what she’s about” – The Telegraph

You may have missed: 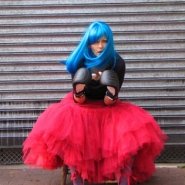 Chastity Belt is a drama set on the battleground between trust and lust. Part comic confession, part one-woman Lysistrata, it asks the impossible questions…
Must old age mean chastity for women of ‘a certain age?’ Could a sex strike end war? Is intimacy dangerous? What would the goddess Diana have to say to us today? Do Hags have more fun? Sharp, sassy and insightful.