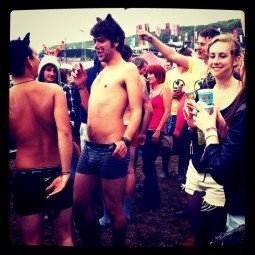 Two more days of Bestival brill bits – and it’s not ALL about topless boys!

So by the time we got to Saturday, we’d already bopped to Blancmange, been scared silly by the Wall of Death, witnessed a stage invasion, and burnt our fingers on some hot German sausage… and we’d only just begun. (if you missed Part One, it’s here innit!)

We were lying on the floor of the press tent, listening to Mr Motivator. We think this is irony, or something?  Eventually, photo taking devices charged, we left the safe haven of the backstage area to take in the craziness of the main fancy-dress day of the festival. Lots of Amy Winehouses, a fair few Freddie Mercurys – we bought old lady cardigans from a charity shop…

The act we’d been looking forward to the whole weekend was the centrepiece of our day – yep, that’s right, la Village People took to the main stage and the whole crowd had a pretty gay ol’ time! They played all the hits: ‘YMCA’, ‘ Go West’ , ‘In The Navy’ and a camp-as-tits ‘Macho Man’. Loserville was loving it, as were the boys near us who decided the best way to enjoy the Village People was to get naked – woohoo!!

Fresh from the perv-a-thon at the Main Stage, we polished off some cheesy chips and then knocked back a couple of rum ‘n’ ginger beer’s at the Sailor Jerry Stage, got ourselves some sexy lady tattoos, and then it was over to the Knees Up Tent for The Lorraine Bowen Experience. What a show! Lorraine whipped up a storm with her array of novelty organs, had us singing along with her amazing songs including ‘The Crumble Song’ (“Everybody’s good at cooking something, and I’m good at cooking crumble, In fact, I’ve got one in the oven, would you like some?” Amazo-fab!!!), and finished off by joining the crowd (including Marcus Brigstocke) for the Hokey Cokey!

It was a quick sprint next, back over to the Sailor Jerry Stage to catch Wolf Gang (Loserville favourites) play a great set to a packed crowd. Fun times were had by all.

Off we trotted into the Ambient Forrest, where we stumbled upon the Horndog Brass Band playing to about a hundred people in a tiny little clearing – it looked and sounded pretty amazing. And then, through the trees, came the sound of what could only be described asDouble  Mercury Prize Winning PJ Harvey. It was PJ Harvey on the main stage. We caught a bit of her set, but we were feeling jolly, and she was bringing us down a bit, so grabbed a sexy burger and swanned around the Magic Meadow.

And then, The Cure. We waited for an hour before ‘Friday I’m In Love’, but it was worth it, and we danced and sang like idiots. To be honest, we’re ‘Greatest Hits’ kinda fans when it comes to The Cure, so we had to weigh up sticking around for ‘Love Cats’ against heading to the nearest bar.

We had cider I think.

We finished off Saturday in the Cabaret Tent with a spot of Gay Bingo. Unfortunately, we didn’t win AND to make matters worse, we thought we’d found some abandoned bread and peanut butter (all still wrapped/jarred obv!), only for it to be whisked away from us by some pesky Oxfam volunteer. Loser! (But yeah, we were totally going to take the bread we just found in the middle of a tent)

We were getting a bit festival-ed out by the time we got to Saturday – we were feeling grubby, we wanted showers, and we were kinda sick of sleeping on a slope so all the blood went to our heads.

So we spent a lot of the last day of Bestival wandering aimlessly and taking pretty pictures, and lying in the press tent listening to photographers and feature writers prattle on about their hard lives :p

But we di take the time to check out a few acts. Obviously, we caught Bjork on the main stage (well, we saw about half an hour, which was about 10% of her set, or something….) – no “It’s Oh So Quiet”, of course, but still a fun, quirky set from the swan lady.

Spam & Beans entertained us in the Comedy and Cabaret Tent, getting the audience involved in a series of crazy/funny gamess and challenges – our favourite game was ‘Sex Face’, where teams had to use sticky tape and any available props (wigs, shoes, anything!) to transform unlucky volunteers’ faces into sexy messes! Hot stuff!

And we were really, really, REALLY excited about seeing Jacques Lu Cont in the Bollywood tent… Until we realised he wasn’t Marcel Lucont. Bit of a mix up on our part. Mang.

We were going to stay out to see Paloma Faith at the Swamp Shack, but the heavens opened and Hurricane Zebedee swung in, so we headed back to weigh the tent down and spent the rest of the night making sure the roof was still there.
_

We woke at 6am on Monday morning to scenes of desolation. A cloud had landed on our field, and empty tents were sailing past on the wind. Luckily, having practiced back at To Do List HQ, we’d mastered the art of popping down the pop-up tent. We lugged our kit up to the bus pick-up, the bright red double deckers suddenly appearing from out of the mist. We felt like the survivors at the end of a horror film.

Our ferry felt like the last boat out of Dunkirk. Well, OK, it was nothing like that. There was no German army approaching. But it was pretty choppy, and rammed to the rafters with smelly festival goers.

And that was it. One incredibly slow train journey later, we were back in London and facing up to the real world once more. No more fancy dress. No more Bestivale. But, perhaps most importantly (for now at least, until we get the rose tinted glasses on in, oh, about a week), no more Chinese water torture-style drip-dripping on our faces as we try to get to sleep. Bliss.