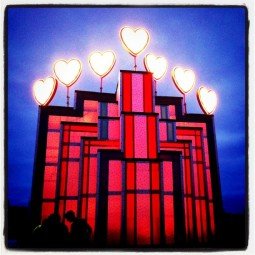 To Do List swapped the city for the magical Isle of Wight last weekend, for four days of Bestival japery…

Armed with a snazzy tent, a disposable barbecue, a pack of bratwurst and a tin of spaghetti hoops (with sausages in), the press juggernaut that is To Do List rolled into Robin Hill Country Park to a fanfare of… oh, hang on, getting a bit carried away. We went to Bestival 2011. Here’s Part One of our Bestival Festival Round-up! (And here’s Part 2)

We arrived. The tent was a pop-up affair. We’d tested it at To Do List HQ earlier in the week, and it had indeed popped up quite rapidly. It took us about two hours to get it to pop down again.

Never mind, that delightful chore was three days away. We cracked open the bratwurst and got the BBQ up and running, before heading out to explore. NOTE: Do not use fingers to move exceedingly hot German sausages from super-hot barbecue to soft bun. So, yeah, our first task was to go find a plaster for a burnt finger!

Finger plastered, we got stuck into the cider and stumbled across Blancmange (of ‘Living On The Ceiling’ fame: “I’m so tall, I’m so tall…” in the Big Top. Good stuff! We were a bit miffed that we missed The La’s earlier in the day (because we misread the times), so we checked out the press tent (with its snazzy chandelier), and snuck into the VIP, with its waving cats. Lucky slebs.

We woke up slightly damp – turns out the To Do List Press Office is only 95% waterproof, and it lets in little droplets of moisture just to keep things interesting.

After polishing off the last of the bratwurst for brekkie, we headed for the Ambient Forest in search of some theatre or poetry or some such. We crashed the end of some yoga-ey meditation, only to find that the performers hadn’t turned up for our first show of the day! Pfft, theatre types, you can never trust them!

Next up was Kyla La Grange in the Psychedelic Worm, who were totally on it and gave a great performance – they even managed not to be distracted by the tw@tted guy painted green who stood right at the front and waved manically at Kyla. Festival gold.

We wanted to see a bit of Ghostpoet on the Red Bull Music Academy stage, but he was bumped to a later slot. Instead, we bummed around (perhaps we went to the bar, who can say) until Brian Wilson was wheeled out onto the main stage to crank out a few Beach Boys classics.

There’s only so much 60s surf-pop that To Do List can take on a Friday afternoon, so we took the opportunity to mooch around the Bollywood and Ballroom fields, and caught an amazing Wall of Death show which scared the sh*t out of us!

Back in the Ambient Forest, we caught ‘Proper Night’, a darkly funny, surreal, fab play from OutHouse Collective, in collaboration with director Dominic McHale. Ace stuff, in a great setting, which kept us guessing right to the end.

The winding paths of the Ambient Forest led us out to the Bandstand (solar powered, no led) in time for Brigitte Aphrodite. We HEART Brigitte! It was an amazing set of quirky, catchy choons, including our favourite about there being f*ck-all to do in Bromley, and a brill cover of The Ronettes’ ‘Be My Baby’. It all culminated in a good ol’ stage invasion, and the crowd loved it! We can’t wait to see Brigitte again.

After a bit of grub and a quick gander at Chromeo on the Main Stage, we scampered up to the Knees Up tent for Underbling & Vow’s time-traveling, singalong celebration of old-fashioned crowd-pleasers like ‘Knees Up Mother Brown’ and ‘My Old Man’.

Then we made sure to catch To Do List favourites Bourgeois & Maurice belt out a few classics (‘Dull People’ and ‘Ritalin’) as well as newer stuff (‘Lizard Men’, ‘C.H.A.O.S.’, and ‘Maurice’s Happy Song’). A perfect way to finish off our first full day at Bestival.

Mindful (yeah, To Do List can be mindful!) of the rammed day we had planned on Saturday, we withdrew to the To Do List Press Office to make notes, eat sweets, and attempt some on-the-job waterproofing.