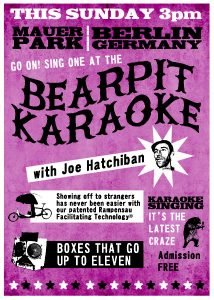 If you’ve explored beyond the most touristy of Berlin highlight you might already have discovered Joe Hatchiban’s Bearpit Karaoke, a weekly – and massively popular – fixture in the world-famous Mauerpark.

Well, if you can’t make it to the Bearpit, the Bearpit can come to you. Vauxhall One and Lambeth Council have teamed up to help Joe bring Bearpit Karoke to London, a city not lacking in wannabe popstars!

Head along to the Vauxhall Pleasure Gardens – the smartened up park area behind the world famous Royal Vauxhall Tavern – on Thursday 14th, Friday 15th and Saturday 16th of September to belt out your favourite tunes in the company of a few (mostly) supportive strangers

They Say: “Joe Hatchiban has been happily helping people unleash their inner Rampensau (performer) all over Berlin since 2009. Originally one man’s mission to seek attention, his weekly Bearpit sessions are now a landmark on the city’s cultural scene.”

Here’s how the Bearpit Karaoke Show works in a few simple steps:

So head to Vauxhall this September and… go on! Sing one!