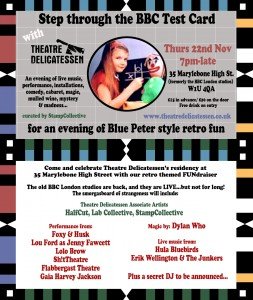 Step from the leafy, luxurious pavements of Marylebone High Street into an arena of unexpected strangeness. This fundraiser event packed full of incredible performances, live music and oddities will celebrate the pop up venue by Theatre Delicatessen in the old BBC headquarters.

Theatre Delicatessen celebrate their residency at 35 Marylebone High Street (the old BBC London studios) with an immersive, site specific retro BBC themed fundraiser party on the evening of Thursday 22nd November. –marking the beginning of the end for their latest pop-up theatre home.

Current associate artists StampCollective have curated a hot-pot of unusual performance pieces for the evening, plus live music, comedy, cabaret and interactive installations.

Guests are invited to wander around the various spaces and reclaim their childhood memories of the BBC: taking in the life-size Dr Who Tardis, getting crafty in the Blue Peter Garden, trying their hand at presenting the weather with Michael Fish, and getting lost in the world of Children’s TV – whilst drinking mulled wine, and soaking up the supplementary spread of entertainment laid on for this spectacular event.

Theatre Delicatessen’s BBC Time Warp offers the chance to explore this iconic building before it is knocked down to make way for housing next year. It offers the public a chance to support this (and future) Theatre Deli projects as they move onto their next exciting pop-up venue

The party begins at 7pm, and guests get the chance to literally step through the BCC test card: there’s a giant one at the entrance!

Theatre Delicatessen have been in residency at the old BBC London studios since May this year. By creating innovative partnerships with commercial property owners and local councils they have earned a reputation for breathing new life into vacant properties, by creating ‘pop-up’ performance spaces and low cost studio space for the arts community. This is the third building they have successfully transformed in Central London. Marylebone Gardens has just finished showing Half Cut’s ‘Shelf Life’ (5 stars from Entertainment Focus) an immersive, promenade performance, taking audiences through the journey of life, from sperm to retirement home. The Godparents of experimental theatre and live art: SHUNT are rehearsing in the building for their new show ‘The Architects’, Wikipedia has an office on site and the building gives home to many exciting small business, community ventures and theatre companies.

London based StampCollective create interactive theatre experiences that engage and celebrate their audiences. They bring strange worlds to life, and invite their audience to interpret, influence, and shape the unfolding action. Playful and challenging, their work raises questions that resonate long after the experiences themselves are over. Provoking thought through interactive play, they respond creatively to space, and unlock their audiences’ imaginations through creative play.

Since their formation in late 2011, they have devised and presented an impressive eight small-scale productions, and appeared at events such as Land of Kings Festival, GEEK Videogames Festival, and the Hide&Seek Weekender. In August 2012 they became Associate Artists with Theatre Delicatessen, after their production ‘Moralgorithm’ successfully featured at Bush Bazaar.

Praise for artists featured at the BBC Time Warp event:

HalfCut
“With the wonderfully entertaining work of HalfCut, the tone is set the moment you walk through the doors”