As one of the world’s biggest arms fairs – DSEI – returns to London, #ArmingTheWorld promises to give an accessible, satirical, colourful and fun insight into some of the products which are taking the world’s military-industrial complexes (not to mention more than a few combatants and civilians) by storm.

We distracted ice and fire Artistic Director Christine Bacon to find out more about the ideas behind #ArmingTheWorld, theatre as activism, inspirations and – of course – things to do! 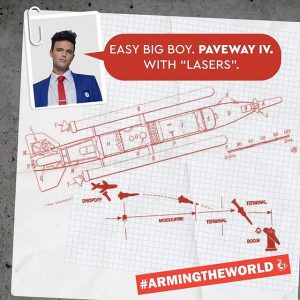 Tell us about #ArmingTheWorld – what can audiences expect?

Lots of fun and games, singing and dancing weapons, amazing costumes designed by takis, free merchandise and plenty of pertinent information about how the British arms trade operates (to chew on afterwards).

#ArmingTheWorld is theatre as a form of activism – what can theatre bring to activism?

Activist groups who have been campaigning on these issues for decades are incredibly supportive of what we’re doing (although some have been temporarily hoodwinked by the ‘out and proud’ shtick!) because it is a playful and accessible way in for audiences who perhaps have never thought much about the issues before. 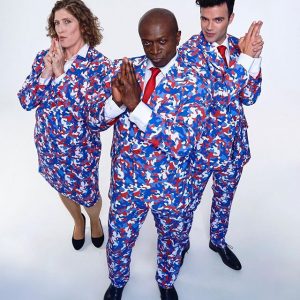 What was the most shocking thing you discovered whilst researching #ArmingTheWorld?

Along with the breathtaking levels of corruption and bribery (the trade in weapons accounts for 40% of all corruption in world trade according to Transparency International) equally shocking was how complicit we as taxpayers are in the propping up of the arms trade and the grossly disproportionate government support it enjoys.

If you could give a keynote presentation at the DSEI Arms Fair, what would you say?

Ha! Probably something along the lines of:

You know that weird feeling deep inside your gut? The unease you are using your champagne to keep in check? What is it saying to you?

Is it telling you that these magnificent machines all around us, brand new, dust-free, and well-lit, are not where they belong? Just for one moment, do you allow yourself to see them where they do belong? Doing what they are made to do?

And so on. But I’d probably be removed by security by then.

Who or what inspires you to create theatre?

It’s different each time. The last play I wrote was a result of a conversation I had with a journalist. Another was because of the ideas generated from a collaborative process. But personally, I’m always drawn to stories and themes in which the actions of governments have profound impacts on the lives of ordinary people. 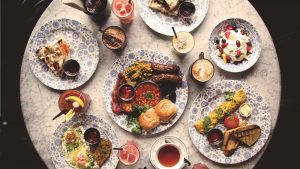 What are your favourite London haunts? (to eat, to relax, to party, to generally pretend the arms trade doesn’t exist!)

Being a parent of two young children, partying is not something I get to do very much these days! But when eating out, Dishoom is my go to. Being an Australian coffee snob I’m also very picky about where I procure my caffeinated beverages and in London you can’t get much better than Workshop or Prufrock. For relaxation purposes, my neighborhood is the place for me. I live along the towpath of the Lea River in Clapton with the stunning Springfield Park on our doorstep.[/vc_column_text][/vc_column][/vc_row]