The BFI London Film Festival ran 2-13 October 2019 – and we popped in to catch four of the standout films in the programme, so you’ll know what to look out for in the coming months!

So, read on for our 2019 London Film Festival reviews! 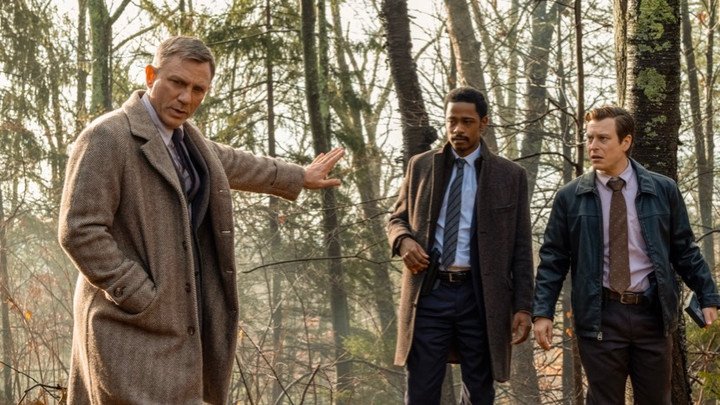 Rian Johnson returns to this galaxy with a magnificent, Agatha Christie-esque ensemble whodunnit.

The stand-out film at the London Film Festival for us, Knives Out is that rare thing – an star-studded ensemble which is more than the sum of its parts. The influences are clear – this is Johnson’s take on an Agatha Christie country house murder mystery, updated to a contemporary setting but still peopled with the array of suspects and detectives that lends itself to a stellar lineup of top-notch actors.

Anyone even passingly versed in the genre will know what to expect from the basic plot: a mysterious death – it it murder or suicide? – leaves a house full of suspects, each with their own motives, and a detective trying to link the clues and find the culprit. The challenge for Johnson, then, is to give this all a fresh new look, something to set it distinctly apart from the likes of Kenneth Branagh’s recent adaptation of Murder on the Orient Express.

The first key to Johnson’s success here is his own script. By bringing proceedings into the 21st Century, albeit still in a secluded old house with a dysfunctional family, and giving his cast a plethora of quotable one-liners, Johnson gives himself space to weave a deceptively intricate plot whilst allowing the performers and the audience to enjoy the journey as much as the denouement.

The second – and perhaps most important – key is the cast. Where star-studded ensemble pieces often fail is that each big name performance feels like a phoned-in cameo. Here, the casting has only half an eye on splashing names across the poster – everyone here is clearly having a good time, but they’re also giving full, well-rounded performances. So you have Christopher Plummer as Harlan Thrombey, marvellously oscillating between benevolent grandfather figure and tough-talking patriarch; Jamie Lee Curtis on delightfully campy form as ‘self-made’ daughter Linda, Don Johnson as her slippery husband Richard, Michael Shannon as eldest son Walter, chip permanently on shoulder, and Toni Collete as try-hard hanger-on Joni. All are perfectly cast, and given ample space to develop their characters beyond mere caricature.

Nevertheless, two performance emerge head and shoulders above the rest. Ana de Armas is just the right shade of inscrutable as the homeware nurse who may or may not know more than she’s letting on, and Daniel Craig proves yet again how much fun he can have in a character role, as famous detective Benoit Blanc. The two form an unlikely yet wondrous crime-solving double-act of sorts, and the fully committed and intricately nuanced performances lend a structural heft to the narrative.

The twist may not be earth shattering, but Johnson cleverly leaves a smattering of red herrings all over the place, such that he can get away with at leas two clever reveals without frustrating his audience. The 130 minute running time flies by, testament to snappy dialogue, surefire direction and characters that – if anything – you’d like to spend more time with. Clever, entertaining stuff.[/vc_column_text][vc_column_text] 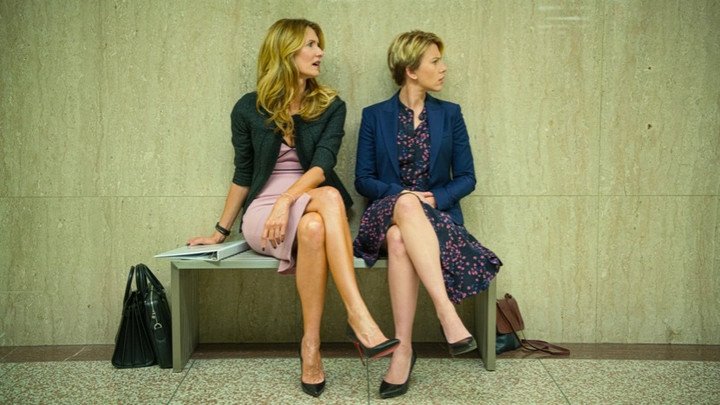 Netflix are certain to crash the Oscar race with Noah Baumbach’s most accessible film to date.

Almost 15 years on from breakout hit The Squid and the Whale, Noah Baumbach is still successfully mining the themes of divorce and separation in his films – and in Marriage Story, he has perhaps told his most compelling, complete story.

Adam Driver and Scarlett Johansson are excellent in what may go on to be thought of as the 21st century Kramer vs Karamer – compelling and totally believable as Charlie and Nicole who, as the film opens, are beginning the process of what they hope will be a simple, amicable divorce.

Of course, things don’t go as smoothly as they would like, and before long they’re lawyering up – Nicole with Laura Dern’s no-nonsense ball-breaker, Charlie first with Alan Alda’s gentle soul and then with Ray Liotta’s no-nonsense greaseball. All the while, Driver and Johansson deliver a masterclass in simmering frustration and barely restrained passive aggression. But what truly lends Marriage Story its heart, and sweeps it beyond mere petty squabbling and middle-class navel gazing, is the endless love and devotion which shines through from Charlie and Nicole for their son, Harry. As in Kramer vs. Kramer, the child is the beating heart of both the central relationship and the film as a whole – one fears for what Charlie and Nicole might have become without this beacon of joy in their life.

Perhaps a little too derivative to truly blow you away, and lacking a dash of the dry humour from Baumbach’s previous offerings, Marriage Story is not a world-changer – but it’s a sweet and (surprisingly) uplifting film about the power of love and friendship, and should sweep Netflix to mainstream movie awards recognition.[/vc_column_text][vc_column_text] 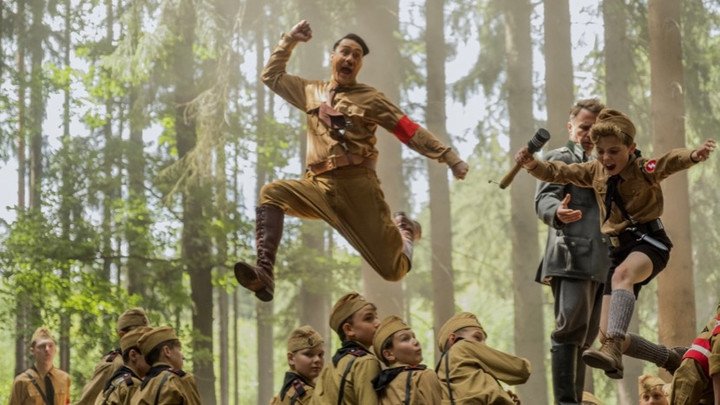 Taika Waititi explores his own weird and wonderful creative universe with this offbeat satirical gem.

Shocking though the imagery at first is – a German child during World War Two with Adolf Hitler as his playful imaginary friend – perhaps the most shocking thing about Jojo Rabbit is how unshackling it all feels. Maybe it’s saying something that enough time has passed for this type of film to be made (although, of course, Roberto Benigni was doing something not dissimilar back in the 1997 with Life Is Beautiful), and for the ‘headline’ conceit to play second fiddle to the broader narrative.

That narrative is – perhaps unsurprisingly – less startlingly ambitious. The titular Jojo, a Hitler Youth enthusiast despite, discovers that his mother – Scarlett Johansson, with little screen time – is secretly hiding a young Jewish girl in their attic space. Does Jojo report the girl to the authorities (Sam Rockwell as a Hitler Youth camp Captain, and Stephen Merchant as a Gestapo agent, both playing for laughs), or will his burgeoning feelings of love win out?

Waititi wisely chooses not to have the whole thing play out as a Wes Anderson-esque comedy, though the comparisons are there (and sometimes a little too noticeable) – there is enough light and shade to ensure that the grim reality of life in 1940s Germany is not sugarcoated, and suffice to say that there is not a happy ending for all involved.

Waititi himself plays the imaginary friend Adolf, in a satirical spoof of the führer which satisfactorily deprives him of any dignity or authority. The shock of finding a representation of Hitler being played for laughs never entirely dissipates, though the relevance of the character to the film lessens as the story progresses. More problematic, however, is the treatment of Rockwell’s character, who benefits from something of a redemptive arc which doesn’t (can’t) feel earned – a misstep in a film which otherwise cleverly treads the line without stumbling into the chasm of bad taste.

Performances all around are good, though Alfie Allen is underused as Rockwell’s second in command and Thomasin McKenzie deserves some more screen time in her role as the Jewish girl desperately hoping for an end to the war before she is discovered. There’s no denying, though, that by the time the credits role, Waititi and his cast have pulled off an imaginative, entertaining feat of brave storytelling.[/vc_column_text][vc_column_text] 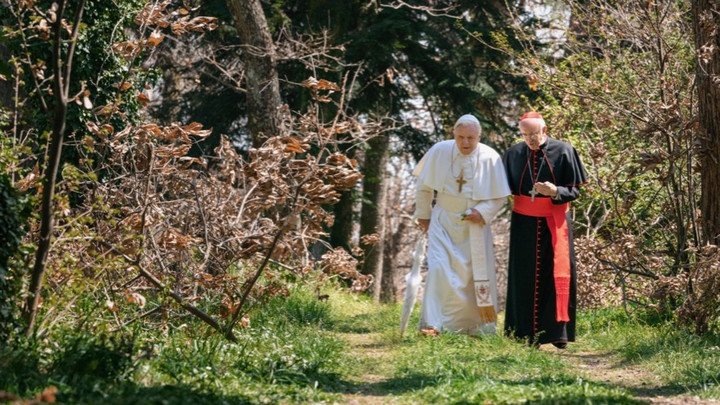 A surprisingly pacy two-hander which showcases excellent acting but dodges the bug questions.

The film no-one thought they needed, and which everyone will probably watch full of sprouts and matchmakers at some point between Christmas and New Year. Netflix won’t be so worried about the necessity of this film, however, if it launches stars Anthony Hopkins and Jonathan Pryce into the Oscars race – and undoubtedly those two performances are the standout in this otherwise forgettable yet totally inoffensive film exploring the papal handover of 2013.

The overarching story is pretty well known: after 8 years as Pope, Benedict XVI decided to resign, leading to her the election of Jorge Mario Bergoglio as Pope Francis. The Peter Morgan-esque hook for The Two Popes is a fictionalised encounter between the pair at the papal summer residence prior to Benedict’s resignation.

Representing conservative and liberal wings of the Catholic Church respectively, Hopkins’s Benedict and Pryce’s Francis go tête a tête in the gardens, make peace at the piano, and finally realise an unlikely friendship in the Vatican itself. It’s all gently entertaining stuff, and far more humorous than it has any right to be. It’s really all about the writing – surprisingly pacy, barely a wasted word – and those two performances which really do embody the real life characters. Pryce in particular seems to become Pope Francis before our very eyes, and it is good to see this excellent actor given a rare starring role.

← Unmissable Things to Do In London in October 2019
Interview: Jeremy Goldstein on Truth to Power Café →