Be prepared for sensory overload with nofitstate’s BIANCO, a mind-melting must-see circus spectacular!

The Southbank Centre has outdone itself with its Winter Festival programming this year, from Gonks and Moominland to Million Dollar Quartet – and of course BIANCO, the cherry on the festive Yule log!

Our favourite British circus family nofitstate has gone to heaven with this monochrome visual gem. The artistry of the show and particularly the organised chaos of the ensemble scenes is incredible. There are so many layers of immersive performance, lighting, mind-boggling rigging and live music – all fusing to create a gesamtkunstwerk (total work of art) of near perfection.

From the outset you find yourself entering a huge UFO-shaped tent that has landed in a Southbank Centre car park – the anticipation is high! 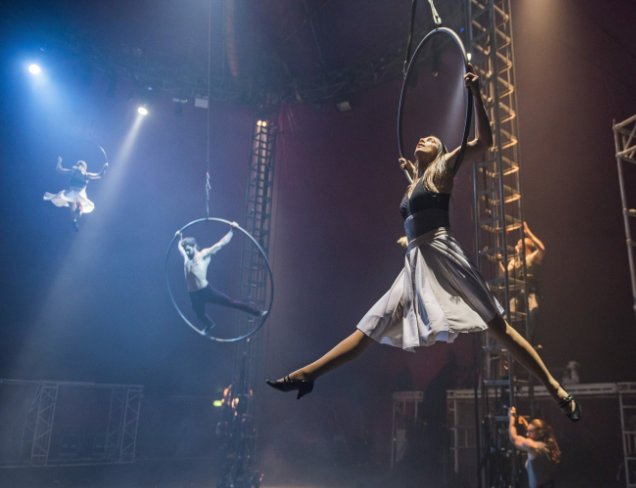 And then the magic starts…BIANCO is bursting with top alternative circus talent working as an artistic ensemble and displaying their own individual skills in solo sections.

From Cecilia Zucchetti’s divine drunken juggling to Francois Buvier’s cheeky geeky tight wire act, we were enthralled and had a giant grin on our face throughout.

The first half proved a little long to stand up for, but it’s worth sticking around for a killer second half that worked us up into a frenzy with incredible performances from Jess O’Connor, who acted as the counterbalance for the muscular Augusts Dakteris’ grand finalé routine. This is the power of the way nofitstate do things, with the beautiful unison between the aerial performer on straps for example and the person holding their weight and controlling their height by flinging themselves up and down the huge centre tent poles.

And then there’s the snow. But we won’t say anything about that ;).